Back to
Kaupunkiliikenne main page

Two generations of tram history in Helsinki. 2-axle trams were taken out of service during 1970's when the first articulated trams arrived. The Variobahns on the left were the first low floor trams in Helsinki delivered from 1999. After only 20 years service they were withdrawn as not suitable for the Helsinki tram network. AA 30.7.2006

Railways started to operate in Finland in 1862 from Helsinki to Hämeenlinna, 100 kms north from Helsinki. Public transport in the city of Helsinki started in 1888 with horse drawn carriages. First horse tram rails were laid in 1981 and electric power was taken into service in 1900.

Motor bus services started to grow in 1920's to the directions were rails were not built. For the first there was plenty of independent companies, but during the World War II Helsinki city bought the united transport company that was then organized to City Transport Authority.

But then the automotive industry learned to make cars cheaper and cheaper, and the labor parties proposed 1955 in Helsinki City Council, that public transport must be put under ground to free the streets for private cars.

Closure of tramways in plan

During the 1960's plans were made to replace plenty of old buildings in the city center with motorways. Tramways were planned to close and public transport would be taken care with an underground system. This plan in knows as ”Smith–Polvinen traffic plan” according engineering agencies Wilbur Smith in USA and Pentti Polvinen in Finland as makers of the plan. The public transport section was anyhow imported as is from the Metro Committee's papers. 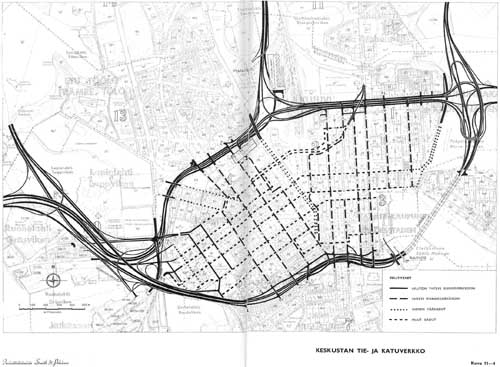 Motorways planned to city centre of Helsinki in Smith–Polvinen traffic plan of 1968.

The motorway building was luckily cancelled, but in 1969 Helsinki signed an order to be a pilot customer for a Finnish company Valmet rail industry as new age metro train production. In Valmet the managers thought that the demand for heavy metro trains would explore in the world at the time the high cost of metro building led into cancellation of metro plans in many cities.

The key features of Valmet metro trains was welded aluminum body and semiconductor control. These really were revolutionary technologies, but unfortunately applied to wrong kind of rolling stock. And what was also sad was, that these revolutionary trains were the largest in the world being wider than wide Finnish railway profile, 3200 millimeters. This made the track geometry much similar to railway lines and difficult to implement into a city structure.

Soon after the metro decision the initial closure of the tramway system was cancelled and new articulated trams were ordered. A reason for this was that tram traffic was calculated to be cheaper than bus operation. And extending of the metro would not replace trams fast enough, so old 2-axle trams required replacement. The new plan was to close the system in year 2000 and the ordered trams would be the last ones in Helsinki.

Valmet, same company as the metro train builder, got an order for articulated trams. They were based on Düwag's technology, but body was designed in Finland and power control was similar semiconductor chopper as was designed for the prototype metro train. 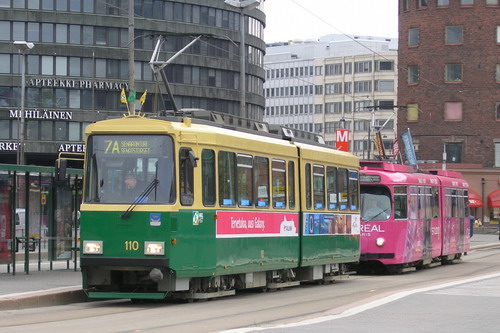 Articulated trams built by Finnish Valmet and delivered from 1973 supposed to be the last trams in Helsinki. These thyristor chopper controlled vehicles are partly still in service as extended with a low floor middle section. Rear of the Valmet tram is a former Mannheimer Düwag tram. AA 19.5.2006.

Helsinki area has had own local train rolling stock since the first years of 20th century. Tank type steam locomotives were only motive power up to 1950's. Tank locomotives did not need a turntable at the end of the service and they also had high adhesion weight for fast acceleration.

In 1950's Valmet started to build light diesel motor units based on a Swedish licence of Hilding Carlsson. These DMU's were used around Finland but they became also main rolling stock in Helsinki area commuter trains until electrification.

Finnish railways started electric operation from Helsinki's commuter trains. The first section was to Kirkkonummi, west from Helsinki. Semiconductor controlled Valmet built EMU's started to operate in 1968. Railways local traffic was developed to a S-Bahn-like style, and one commuter train line was built during 1970's to new suburb Martinlaakso. Martinlaakso line was originally a part of the metro net plan, but the building could not wait for developing of Valmet's metro techology.

Finnish Valmet built EMU's started the new era in Helsinki region commuter services. They were first electric service in Finnish State Railways. But they were also very modern having semiconductor based propulsion control. The left hand side version still in original livery. AA 22.3.2003.

EMU's were delivered in two classes from 1968 to 1981. Then there was total of 100 two coach units in service a year before the metro started to operate. The available commuter train service shaped strongly the urban structure along the railway lines and the region expanded mostly outside the Helsinki in the neighbour cities Espoo and Vantaa.

Heavy rail connections formed only 3 ”fingers”. The area between these fingers was serviced with motorways. Orbital public transport connections missed and the result was that the road traffic started to dominate Helsinki area transport. When the metro line finally opened in 1982, it replaced the buses on the motorway beside. The bus lines were cut to end to metro stations, and the connecting feeder service system had born. This extended the travelling times. During the operating of the electric commuter trains and the metro the share of public transport has decreased from 70 % to the current 40 %.

Helsinki has planned to extend the metro line to the western neighbour city Espoo since the first ideas of the metro network. This has caused a long political war since 1980's when Helsinki metro started to operate. With it's low population density, Espoo has not been interested in investing to a heavy metro and cut the straight bus lines to feeder service. Neither has Espoo been interested in increasing the population density, as it prefers to offer a higher living quality alternative on the Helsinki urban area.

Light Rail was taken in discussion as an alternative in Espoo. A pressing group started to promote Light Rail in 1989, and the city of Espoo adopted the idea soon. The Ministry of Transport and the Helsinki area cities called 3 auditors to evaluate the Helsinki urban area transportation system in 1992, and the auditors analysis supported the idea of a Light Rail system to the area. But Helsinki has been strongly against Light Rail to enter the area to compete against it's heavy metro.

Authorities has ordered plans for the metro to Espoo in approximately 10 years intervals. Allways the result has been that metro increases travelling times and public transport cost. The latest study was Environmental impact study released in January 2006. That proved, that also car traffic in Helsinki will increase if the metro extension will be built.

In September 2006 Espoo city council changed it's mind. Espoo agreed the idea of the metro extension, but with many conditions to quarantee the high quality of the metro in Espoo. Rumors say that the real reason was to make Helsinki to agree the extension of the Ring road 2 from Espoo to Helsinki side.

A project plan was made during 2007 resulting to app. double cost of what was the 452 M€ base for the decision in autumn 2006. For the final building decision a reduction to the price was required. After state decided to support metro with 200 M€, metro planners published a price tag of 714 M€ which fitted to the 30 % support requirement in the Espoo city council decision conditions. A 100 M€ price reduction was explained by shortening the stations, which decreased the system capacity with one third portion.

The building did not proceed within the original timetables. Finally in spring 2016 Länsimetro Oy, the city owned company to organize the building of the systen, announced that operation will start in August. A great campaign started, but everything collapsed in June. Managers had to give up, as there were even plenty of missing components and no chance to start any testing of the system.

It took more than a year until doors were opened for public in November 2017. Still the largest station, Tapiola, was under construction with regard to the bus station.

But troubles were not over. When direct bus services to Helsinki were cut, the new real world proved that the metro did not shorten travel times. It extended travel times for many citizens. And not only some minutes, but doubled the travel time to near one hour in worst cases. Also the final cost of the project started to formulate. The worse calculation was made by the leading newspaper Helsingin Sanomat. Their result was some 2000 million Euros for the project that was decided for a price tag of 452 million Euoros.

New low floor trams were delivered to Helsinki from 1999. Some minor extensions of tram lines has been built for few new areas, but the Helsinki authorities has considered trams as slow street tram system not capable for suburban service.

Despite the metro hegemony, city planners have drawn some plans to extend the tram network outside the city centre. The first big plan was an orbital tram line called ’Joker’ released already in 1990. The idea competed with the metro extension to Vuosaari and was not realised. The line was finally opened as a bus service in 2005. The number of passengers has grown on the line continuously over the capacity of buses, but still major traffic planners were against to build the line to tram. The daily number of passengers in September 2007 had grown to 20.000 and in 2009 it was already 30.000. Headway of the 3-axle buses is 5 min., but still some support service is required.

The project became true finally in March 2016 after the governmet decided to support the project with a compensaton of 84 M€. The condition of the support was that the project must be started immediately. The planning started in 2017 and the construction in 2019. Estimated opening of the service is for 2024.

A new northern suburb Viikki was planned with a tram line in 1990's, but the tram is still missing and the inhabitants claim for bad public transport service. The first real tram extension was the former western harbour Jätkäsaari. It is just near city centre so the extension of two existing tram lines 6 and 8 was quite natural. The first extension for line 8 was ready from the start of 2012. New track to harbour was taken into service in August 2012 for lines 6 and 9.

The first real suburban tram line will be the line to Kruunuvuorenranta across the sea east from Helsinki city centre. This connection was originally planned as heavy metro, but this idea is cancelled because of the high price and low passenger number for an investment of that price. The line will cross seawater offering several kilometers shorter route than with cars. There existed a political understanding that the line must be built at the time the houses are built to have the benefit in the land price and make the tram familiar for the inhabitants instead of travelling with cars. But the tram was delayed by forces against investing into public transport only bridge. First houses need to wait trams for several years, though the process is on the way.

A remarcable movement towards real growth of tram operations was the Helsinki city master plan of 2017. It includes the idea of tram network to cover the suburban area of Helsinki. It is connected to the conversion of motorways to boulevards to make possible to use the protective waste land near current motorways for housing.

Back to home page. Top of the page.